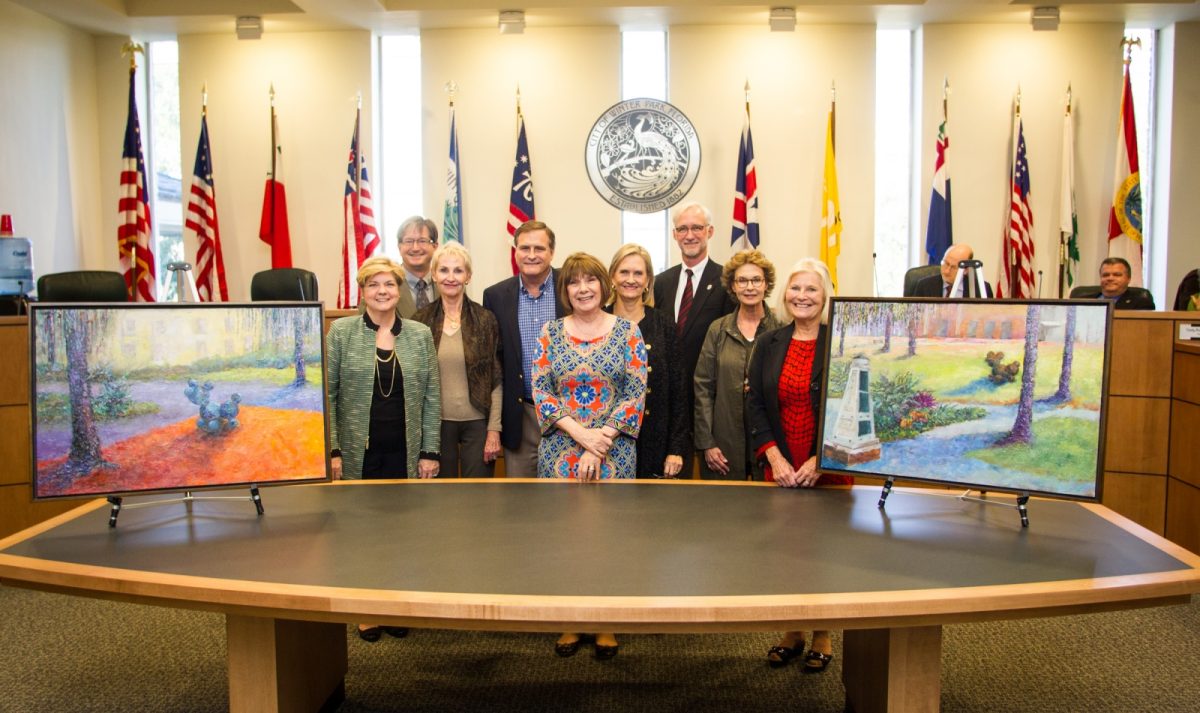 “Winter Park has provided Employment Technologies with an ideal environment for the growth of our business,” said Joseph Sefcik, Jr., co-founder and president of the company. “In the spirit of providing a symbol of gratitude to the City, and the creative spirit that the City promotes for all who visit and live in Winter Park, we felt that the gift of art would serve as an appropriate and lasting symbol of our thanks.”

The two original oil paintings were commissioned by Employment Technologies especially for the City of Winter Park.

Both paintings were created by North Carolina landscape artist, Belva Sefcik, whose water and still life scenes have earned acclaim throughout the Southeast. Ms. Sefcik has been a landscape artist for more than 30 years. She is the sister-in-law of Employment Technologies co-founder, Joseph Sefcik.

One painting visualizes Shady Park, identified by its Hannibal Square obelisk at the corner of New England and Pennsylvania Avenues. The other painting focuses on a sculpture in the park, a five-foot tall, eight-foot long bronze statue created by Miami artist Robert Chambers. A playful blend of science and art, the sculpture depicts a three-carbon molecule that is shaped like a dog.

The Winter Park Public Art Advisory Board (PAAB), whose members serve Winter Park to enhance the City’s artistic and cultural personality, provided direction for the selection of the setting. “Shady Park and the Molecular Dog provide Winter Park with a pair of symbols illustrative of contemporary growth within the city, as well as a futuristic 21st century icon,” noted PAAB chairperson Susan Battaglia.

The two original paintings will be displayed in prominent publicly accessible viewing locations in Winter Park with the exact locations to be announced some time later during the first quarter of this year.

Thank you! Your submission has been received!
Oops! Something went wrong while submitting the form.

Experience the EASy Simulation difference for yourself!